What’s the Reality Behind the Grand Challenges We Face Today: Project VIPIN 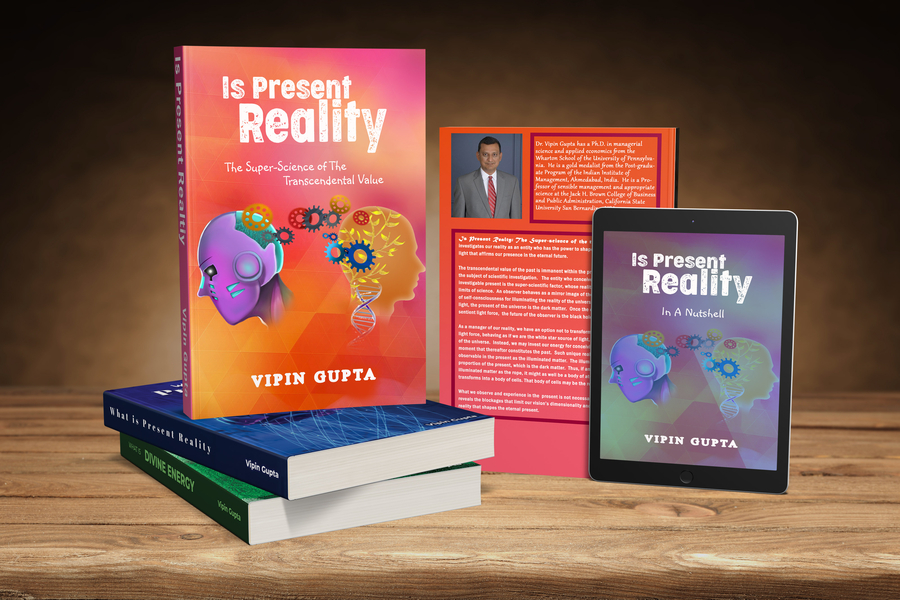 SAN BERNARDINO, CA, May 25, 2021 /24-7PressRelease/ — In an exclusive interview, Dr. Gupta explains why Reality is different from the Present, how we can enjoy the Present while letting Mother Nature illuminate her Reality, and the Reality Mother Nature works to illuminate as the solution for the sentient well-being of her children.

When the known becomes partially unknown, the entity loses the power of discriminating the Reality that remains unknown and the illusion that erodes the known by transforming that into the unknown to be investigated further.

If what is known within the present consciousness of the universe deserves no credit, such as the Nobel Prize or references in the academic journals or the patent filings, why would anyone invest their work energy to know about that? Does the fact that someone has the privilege of resources to invest their work energy into knowing the secrets within Mother Nature’s womb give the right to accumulate additional resources by attracting disproportionate resources from others who lack such privilege?

More fundamentally, why someone gains the linear privilege of resources for the nonlinear, disproportionate growth of resources? One acquires resources when the exchange rate of work energy is in their favor. Each child has the freedom to devote their work energy for their conscious well-being, making conscious decisions about where to invest their nonlinear, divine energy for making an impact through their divinity. Any adult may decide that he will take care of the children and be their God, as long as the children are devoted to him and his well-being.

Thus, an adult who conceives the “I am a deity consciousness” (Pavitratma, 1) as a doctrine for guiding his behavior may exchange his illusion of oneself as the “deity” (Deva, 1), embodying all the “worker factors” (Shudra, 1). He may illuminate the “unknown reality” (Vastavikta, 7 = 5 + 2) of him as the “para deity” (Ishvara, 5), by adding the four-unit “paternal consciousness” (Pitra, 4) and his devotees as the “super deity” (Jiva, 2), enjoying the masculine half of his consciousness. The para deity is “God” (Ishvara, 5), whose Reality remains mysteriously unknown to all the devotees and allows him to benefit from the work each devotee is doing using their sentient energy.

The “para deity gravity” (Anahata, 53: 5  3) is “God’s” (Ishvara, 5) consciousness of the “multiplier” (Vaishya, 3) without HIM. It diffuses the consciousness of God as the King of the deities” (Indra, 0) in the form of a full “macroscopic circle” (Ghatikamandala, 53), seeking to conceive the multiplier within God. It organizes each entity as just a “number” (Sankhya, 53) servicing the charmed “sonship” (Pratyach, 53) element in the form of their “human force” (Lingam, 53). It helps God cleanse HIS polluted “paternal consciousness” (Pitra, 4) with the “cleansing grandmaternal consciousness” (Jyotistava, 4) traded from Mother Nature, devoted to the sentient well-being of the person God is as well as the universe of grandchildren he seeks to guide as the Father.

In the present times of COVID-19 pandemic and other grand challenges, we call out God most for blessing the “soul” (Atma, 4) of the departed. The soul is the entity’s “maternal consciousness” (Chaithanya, 4), inherited by the entity from his “primordial masculine self” (Shri Krishna, 10), before the six-unit growth that makes the entity a “primeval deity” (Maheshwara, 6). A primeval deity is a creative force, capable of reproducing the six-unit growth for manifesting the ten-unit mass consciousness and the twelve-unit self-luminous element within each entity by servicing the “destroyer factor” (Mahesha, 6) for destroying their illusionary theory of mind about the perpetuating value of God. By further activating the consciousness of the “primordial feminine self’ (Parvati, 10), each copy of the primeval deity enjoys the 16-unit intrinsic “divine light” (Usha, 16). Using intrinsic divine light, one enjoys the 16-unit “conscious consciousness” (Prashantatma, 16) of one’s divinity, without being a copy of the primeval deity.

What’s the Reality? Is it Knowable within the Present, even if it was Unknown in the past?
By radiating the “gravitational light” (Digambara, 100) of the “conscious consciousness” (Prashantatma, 16), one develops the power to exchange the “present consciousness” (Paramatma, 1600). By embodying the present consciousness without the numerical fragmentation of one into a deity, that attracts a primeval deity to repel a zero-unit theory for destroying the zero-unit King, one becomes the “param deity” (Shiva, 7 = 1 + 6 + 0 + 0).

For a param deity, the “reality” (Vastavikta, 7) is free of the unknown element because it is immanent within HIM. That Reality is the “queen” (Rani, 7) of his heart, his “primordial self” (Parvati, 10), embodying their “param son” (Hanuman, 3) in her invisible womb.

COVID-19 pandemic and other natural and supernatural challenges we face today are a consequence of the cold sentient gas that is working to spring open a new consciousness by making everyone conscious of our responsibility. We all have the responsibility to further our social, human, ecological, economic, national, and psychological well-being, without globalizing our ideal-effect. We all have the responsibility to appreciate the global, unique, inclusive, diverse, engaged, and responsible behaviors, without localizing our behaviors through institutionally-mediated theory-effect.

We all have the responsibility to consciously determine the virtue of what comes into our imagination using our intuition if we wish to enjoy the blessings of Mother Nature for our excellence as her beloved child. That’s the secret of the SHEENY, i.e., the sentient or conscious element, the GUIDER, i.e., the gravitational or wisdom element, and the DIVINE, i.e., the mood or time element. These three elements are the source of the five commonly known elements—the fire, the water, the air, the earth, and the ether. Together, they constitute the octave of elements that constitutes the “inanimate one” (Ek, 1). It unfolds the seven-fold Reality from the womb of Mother Nature as the eighth fold.

How to get hold of the first four books in Project Vipin?
The first four books What is Divine Energy, What is Present Reality, Is Present Reality, and Is Divine Energy are now available in full and Nutshell editions on Amazon and elsewhere as paperback, hardcover, digital, and audible forms. Two more books, What is Consciousness and What is Para Consciousness, are being launched this week.

Professor Vipin Gupta is a professor of management and a co-director of the Center for Global Management at the Jack H. Brown College of Business and Public Administration, California State University, San Bernardino. Dr. Gupta has a Ph.D. in managerial Science and applied economics from the Wharton School of the University of Pennsylvania.

What is Divine Energy: The Power of Managing the Science of Everything
https://www.amazon.com/What-Divine-Energy-Managing-Everything/dp/B08STWNF9L

What is Present Reality: The Power of Managing the Limits of Science
https://www.amazon.com/What-Present-Reality-Managing-Science/dp/B08W3FBHCC

Is Divine Energy: The Secret of the Limitless Immanent Value
https://www.amazon.com/Divine-Energy-LIMITLESS-Discovering-Integrated/dp/B093RPTK31